MANDELA MEANS SO MUCH TO LEEDS

Twenty years ago Mandela walked free from jail. Leeds is rightly celebrating that day. In this blog I’m reflecting on some of the key moments that link Leeds to Nelson Mandela and our struggle for equality, justice and rights.

There are many ways that Nelson Mandela has been woven into this city and I can only speak of the ones I know. He’d been in jail for seven years when the Swarthmore Centre in Leeds hosted a meeting where I could join the demonstration against the 1969 tour by the South African rugby team.  The organizers were from the Communist Party (they seemed so old!) and no doubt people from the Anti-Apartheid Movement were there too.

I got on the coach full of people to Twickenham who hated apartheid as much as I did.  Soon after the match started I climbed the fence assuming that all my comrades would follow me onto the pitch to stop the game. They didn’t. I was carried out of the ground by five large cops and dumped in the car-park. I learned my lesson: better tactics were needed next time.

I’d begun to understand apartheid meant as a child when the newspapers showed the photos of the Sharpeville massacre in 1960. When we were 15 my friend and I pledged to leave England and fight in the African National Congress when we left school. He’d astonished me with the accounts of the racism he experienced in the sleepy Lancashire town where his dad was the local GP.

It was in Leeds where I could really begin to understand the connections between what was happening in South Africa and the situation of black and Asian citizens in the UK. In 1971 two Leeds police officers were convicted of actual bodily harm of David Oluwale, the Nigerian who had been sleeping rough in the city centre.

Leeds’ United Caribbean Association said in its submission to Parliament in 1972: ‘Harassment, intimidation and wrongful arrest go on all the time in Chapeltown . . . Police boot and fist youths into compelling them to give wrong statements, but the right ones that the police requires’ (cited in Max Farrar The Struggle for ‘Community’, 2002, p. 221).

So Leeds was able to identify with South Africa through its black citizens struggling for justice and equal rights. After the 1981 uprising money was offered to Leeds by the National Association of Boys Clubs to provide facilities for black youths.

Within a couple of years the Boys Club on Chapeltown Road was taken over by the council and renamed The Mandela Centre. In those days, it was run by an elected committee, chaired by Grantley Bovell. Fittingly, it was opened on 9th June 1984 by the prominent campaigner Darcus Howe, then editor of the most significant black magazine in Britain, Race Today. 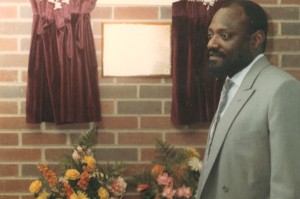 Recognising Mandela’s importance as the figurehead of the struggle for a free South Africa, Leeds City Council had in 1983 named a small park in the centre of Leeds ‘The Mandela Garden’. When this was removed to make Millennium Square, the big news was Nelson Mandela coming to Leeds in 2001 to speak in that fine public space.

Along with hundreds of others, I was in the crowd as he dedicated the new Mandela Garden at the southern entrance to Millennium Square.  Susan Pitter remembers that amazing day here. The iconic open hand sculpture, greeting all visitors, from all parts of the world, is a symbol of Mandela’s commitment to unity, regardless of ‘race’.

The Palace Youth Project (PYP) in Chapeltown took up the struggle in 1988 by designing and making a Carnival Queen costume. Yvette Smalle, then the leader at the PYP, reminds me that it was called ‘Mandela: Wings of Freedom’.  Nelson’s and Winnie’s faces were made up of thousands of individual sequins, each one representing the people of Africa. PYP staff and supporters formed the troupe which accompanied Samantha Morton in the parade on Bank Holiday Monday. 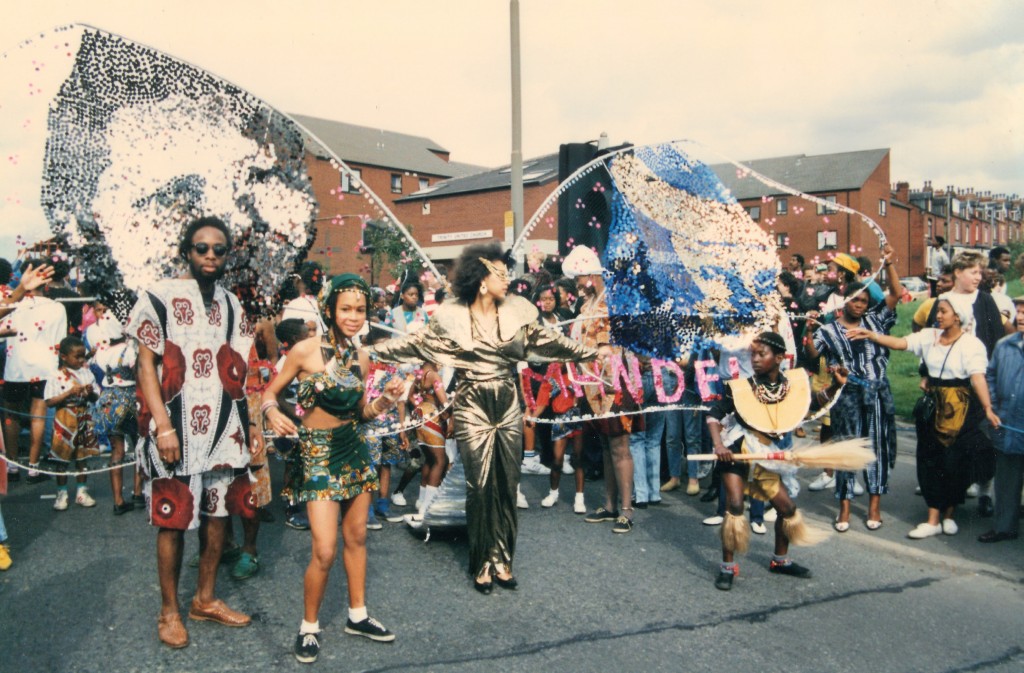 PYP again formed a focus for our longing for freedom when Nelson Mandela was released from jail on 11th February 1990. We clustered around the (tiny) TV in a room specially decorated for the day.  One poster reads ‘Freedom. Mandela Today. South Africa Tomorrow.’ 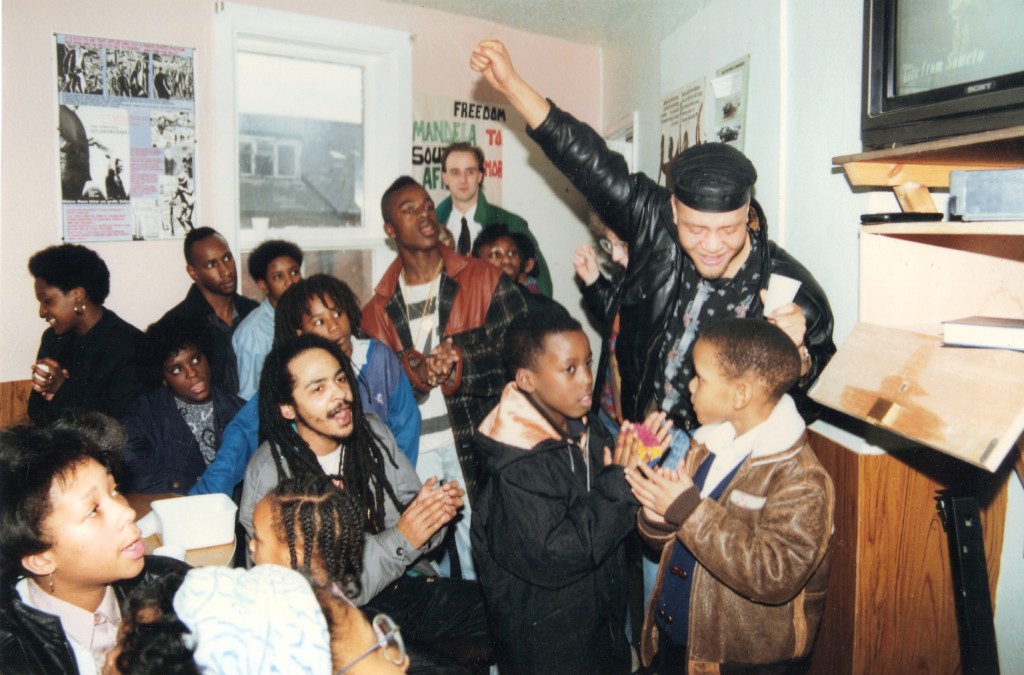 Throughout this period the Anti-Apartheid Movement was active all over the country and it was visible in Leeds. Unfortunately, I don’t have any materials archived and I can’t find the Leeds group on the web. That must be rectified.

On the day of his death in December 2013, Leeds paid tribute both in Mandela Gardens and at the Mandela Centre. In this article you can see commemorative photos of activities in the city.

Showing how close to home South Africa is, you will also see Mr Mandela visiting Hilda Bernstein, whose husband Lionel was imprisoned with him. Hilda and Lionel’s daughter Frances was central to the Women Against Apartheid group which campaigned tirelessly in Leeds. Frances’s talk about the anti-apartheid struggle, with liberation songs from Free Range, will be at heart in Headingley on 23rd May 2014.

Among those at the Walk of Respect for Nelson Mandela that took place in Leeds on 13th December 2013 was Selim Essop. He is another local person connecting us to South Africa.  Imprisoned for five years with Nelson Mandela on Roben Island, he spoke movingly about their comrade Ahmed Timol who was tortured to death by the South African police at their HQ in Johannesburg. 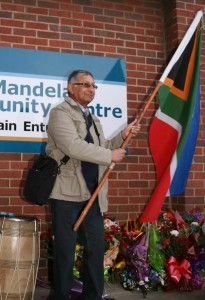 Salim Essop at the Walk of Respect for Nelson Mandela in Leeds, 13th January 2013 © Max Farrar

But of course this walk was full of pleasure and celebration as well, since Nelson Mandela’s legacy is not simply one of resolute struggle for justice, equality, and rights, but one which reminds us that our dreams will only be fulfilled if we can infuse that struggle with humanity, joy, respect and love.

The Walk of Respect for Nelson Mandela on 13.12.2013 ended at Leeds’ Mandela Centre with joyful songs and dance © Max Farrar

This site uses Akismet to reduce spam. Learn how your comment data is processed.