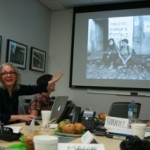 Professor Ben Carrington invited me to Austin to give a lecture and a workshop on visual sociology at the University of Texas Sociology Department (in March 2014). Such a great experience. Preparing for the lecture made me read properly Susan Sontag, Roland Barthes and John Berger on photography. I also read Prof Les Back‘s great […]

PublicSpirit is a new website which investigates the links between ‘faith’ and public policy. It was initiated by Prof Tariq Modood (Director of the Centre for Ethnicity and Citizenship at Bristol University). He asked me to write a short piece for the site on multiculturalism, in relation to ‘muscular liberalism’ and the claim by Prime […]

Before I decided to stop writing as an academic I agreed with my friends Karim Murji and Gargi Bhattacharyya to try and write something about political engagement in the sociology of ‘race’ for a special edition of Ethnic and Racial Studies.  I wanted to say something about the emotional work that goes on when we enter […]

Why has sociology failed to learn and teach about Islam and the lives of Muslims?

I’ve just completed my three-year appointment as an Associate of the Higher Education Academy within its Islamic Studies Network  Working with Prof Malcolm Todd, our task was to promote learning about, and specifically teaching in British universities about Islam and the lives of Muslims, from the perspective of social science. While we did some good work, […]

Posted in sociology | Leave a response