Reflections on the Srebrenica genocide in July 1995

Qari Asim MBE, the Chief Imam of Makkah Mosque in Leeds, asked me to contribute to the community Iftar on 12th July 2015 which was dedicated to remembering the murder of 8,000 or so Muslim men and boys in Bosnia twenty years ago. I was given five minutes so I didn’t read the text I’d written […]

My friend Dr Ali-Reza Bhojani invited me to talk to his students at the Al-Mahdi Institute in Birmingham last October, so I wrote this paper and then forgot to post it. It develops the position I’ve advanced elsewhere, that I call ‘critical multiculturalism’ as a way of thinking about, and responding to,  the various types […] 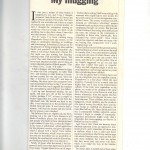 On youth in the multi-cultural inner-city in the 1990s

Youth in the multi-cultural inner-city: Learning from experience  I learned as much of my sociology from experience as I did from books. Ethnography has always been my preferred method. I learned to write as much from home-made journalism, particularly for Chapeltown News and Big Flame, as I did from the great literature I’ve consumed since […]