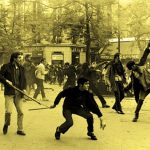 Paris Today Leeds Tomorrow Remembering 1968 in Leeds “So you think you want a revolution, well, you know . . .” sang #JohnLennon. Yes, I did, and so did #LouiseLavender #TomSteele#SarahPerrigo #GildaPeterson #MikeMcGrath Here are our memories of those heady days. I guess you’ve got to be about 70 and still infected with the Virus68 […]

Islamism and Terror – a Western way of doing politics

This chapter in an edited collection sets out in some detail the history of that tendency within Islam that has adopted an explicitly political strategy in order to introduce the Islamic ummah across the globe.  This tendency is usually referred to as ‘Islamism’ to distinguish it from the majority view that Islam is system of belief […]

People, Poetry and Politics – the Novels of Don Bannister

Don Bannister was a founder of the group of social psychologists who have developed ‘personal construct theory’. In his later years he wrote a series of novels. My friend Trevor Butt, a colleague of Don’s in the 1970s and 80s, asked me to give a paper on Don’s novels at a special conference in honour […]

Posted in culture and politics, writing | Leave a response