David Oluwale – was he a secular martyr?

417414_1_En_9_Chapter_OnlinePDF (publishers’ proof of my chapter on David Oluwale) I’m Secretary to the David Oluwale Memorial Association (DOMA) and I spend a lot of my time reminding all those who are interested of the fate of a man who stowed away on a ship leaving Lagos in 1949, and who was killed by two policemen […] 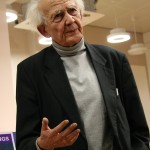 ZYGMUNT BAUMAN — My appreciation, and thanks

It’s exactly a year since Zygmunt died. I wrote this soon afterwards but now is the time to circulate it. He had such a big impact on me and I miss him. So much worse for his family. ZYGMUNT BAUMAN (1925-2017): BEING HUMAN How hard it is to write about an exceedingly famous person you’ve known […]

The Caribbean Carnival — a site for celebratory politics

I’ve loved the Caribbean carnival in Leeds since 1972. Much of my energy in 2017 was taken up with engaging ever more deeply with this extraordinary form of art and politics: Enjoying and photographing the Trinidad carnival  in Port of Spain, and participating in its extraordinary J’Ouvert parade  With Guy Farrar and Emily Zobel Marshall. […]